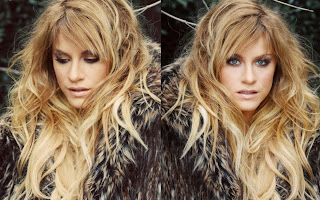 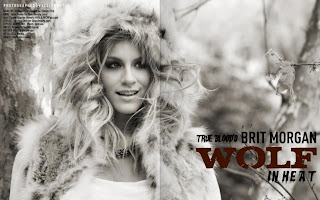 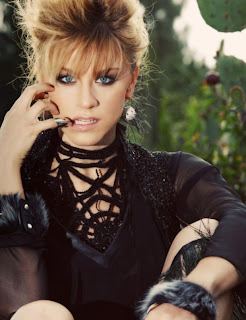 The makeup look I designed for Brit's "Wild for Wolve's" Issue for Troix Magazine was one that would translate into a raw organic beastly beauty that would mesh with the natural surroundings in the wilderness.   The goal was for her to become one with her environment.
To do this , I wanted to give her a rich beautiful base. I warmed up her features with a foundation that included a  blend of  SB Airbrush 003 (Ivory) and 005 (pure beige).  I didn't want her to get completely lost in the wild so i made sure to contour her nose on the sides and tip using a teeny tiny bit of S/B Airbrush 007 (Golden Honey).  I also used 007 to contour her cheekbones from the middle of her ear to about 1/4 of the way down along her cheek...  and also along her jawline.  This base was essential so she wouldn't get lost in her fur!!  I used a mixture of copper and brown eyeshadows from Mac as well as some "Gingerly" blush on her cheeks from Mac.  I used Creme D'Nude from Mac on her lips. For an extra pop of warmth on her face, I finished with a quick dusting of MAC's Mineralize Skin Finish Natural. We ended up with some AMAZING photos!! You can see the entire shoot at
http://www.troixmagazine.com/brit#!__brit
Credits:
Photos: Lesley Bryce
Makeup: Veronica Hernandez
Hair: John Blaine
Wardrobe: Josh Seth
DONT FORGET TO WATCH THE BEHIND THE SCENES VIDEO!!!!
Posted by Makeup by Veronica at 4:08 PM No comments: